The feast of Saint Lucy: tradition and folklore

The feast of Saint Lucy in Sicily and Europe

The feast of Saint Lucy is on December 13th: she is one of the most beloved saints of the Christian faithful. Lucy was a girl from Syracuse (283 – 304 AD). As a Christian, the Romans arrested and tortured her, but did not renounce her faith. After her death the Syracusans buried her in the catacombs that now bear her name. The faithful built a church in her honour here. Inside is the Burial of St Lucy, a 1608 canvas painted by Caravaggio. Lucy is the patron saint of eyes and sight. This is because of the Latin origin of her name, i.e. lux (light). A popular saying goes ‘Saint Lucy, the shortest day of the year’. This is because in ancient times the feast coincided with the winter solstice, thus the shortest day of the year. Lucy’s task is to drive away the darkness and announce the return of light to the world.

The celebrations in Syracuse

But how is Lucy celebrated in her hometown? The feast of Saint Lucy in Syracuse begins on December 9th when the faithful display her silver statue dated 1599. On December 13th, the statue leaves the cathedral on the shoulders of men called ‘green berets’. Devotees, called ‘green handkerchiefs’, carry her relics. The faithful follow the procession to the church of Saint Lucy. The statue remains in the church until December 20th when the Syracusans bring it back to the cathedral.

The feast of Saint Lucy in Savoca

Lucy is also the patron saint of Savoca, in the province of Messina. Here, the feast of Saint Lucy is very much felt by the population. On the second Sunday in August, celebrations take place that commemorate her martyrdom. A man carries on his shoulder a little girl dressed in white representing Lucy. Various figures surround the girl in an attempt to lead her into temptation. Among them is the devil: a man dressed in red wearing a wooden mask and brandishing a pitchfork. Little Lucy also wears a rope around her waist. Some figures in Roman dress and two oxen pull the rope. The little girl’s task is to go around the village three times without giving in to temptation. Once the procession is over, the celebrations in honour of the saint can begin.

The feast of Saint Lucy in Sweden

Lucy is venerated here by both the Catholic and Lutheran Churches. According to tradition, children bake saffron biscuits on December 12th. On the morning of December 13th, the eldest daughter wears a white dress and a crown of leaves with seven candles. Followed by the other children of the house, she wakes up all the family members and offers them biscuits. On this occasion, children sing the song ‘Santa Lucia’: a traditional Neapolitan song translated into Swedish. Every year, the Swedes elect the ‘Lucy of Sweden’ who participates in the feast of Saint Lucy in Syracuse. 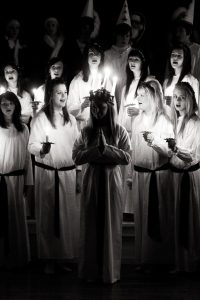 If you too don’t want to miss out on the feast of Saint Lucy in Sicily, we invite you to join one of our cultural tours. With our ‘Syracuse and Noto tour’, you will have the opportunity to visit places linked to the history of Saint Lucy. Also, it will be possible attend the festivities in Savoca participating in the tour ‘The Godfather movie iconic location: Savoca and Forza D’Agrò’ during the month of August.

To learn more about Christmas traditions in Sicily, you might also be interested in our article “Christmas representations: Etna and Taormina”.